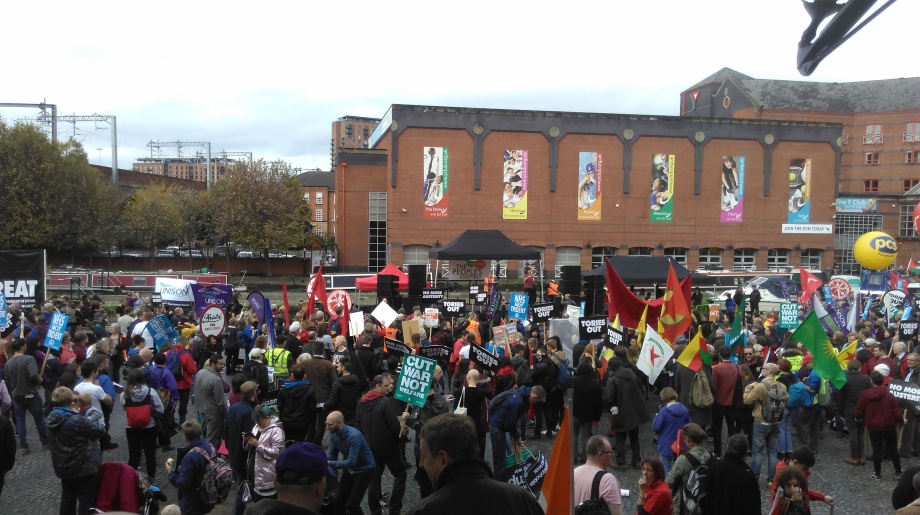 It was great to attend the Tory Party Conference last Sunday in Manchester and join the scores of protesters who were standing up to the brutal regime currently residing in Westminster. There were many different leftist groups there – The People’s Assembly, Stop the War Coalition, the Communist Party of Great Britain, the Socialist Party, Unite, Unison, CND, and various others supporting refugees, disabled people and other victims of Tory savagery – along with regular people from all across the country, all uniting to voice their anger at the endless array of injustices being meted out by the government. It was incredible to witness so many people in one place who all want the same thing; a country where compassion, rather than cruelty, is the hallmark of political life.

There was a real sense of internationalism there; people were flying flags in support of Kurdistan, Catalonia and Palestine, and it was a stark reminder that we’re all in this boat together, fighting back against the same tyrants and oppressors, although the repression we face in the UK is obviously not comparable to what others face elsewhere in the world. It was impossible not to feel heartened by the turnout – around 30,000 people – and the renewed confidence with which everyone carried themselves thanks to Jeremy Corbyn’s stunning performance in this year’s snap election. There is a tremendous feeling of hope in the country that we can change things for the better; that neoliberalism is not graven in stone. If we can keep the momentum going until the next election, I think we have a decent chance of ousting the Tories and ending the suffering of millions of people both at home and abroad.