On the 21st of August, 2015, the British government executed two suspected ISIS militants in Syria with no due process. One, Reyaad Khan, was a 21-year-old from Cardiff, while the other, Ruhal Amin, was a 26-year-old who was raised in Aberdeen. Britain, a country with no death penalty, now has the power once again to execute its own citizens; except these citizens no longer have to be even convicted of a crime. They now simply have to be suspected of a crime, not even charged, in order to justify the government murdering them. 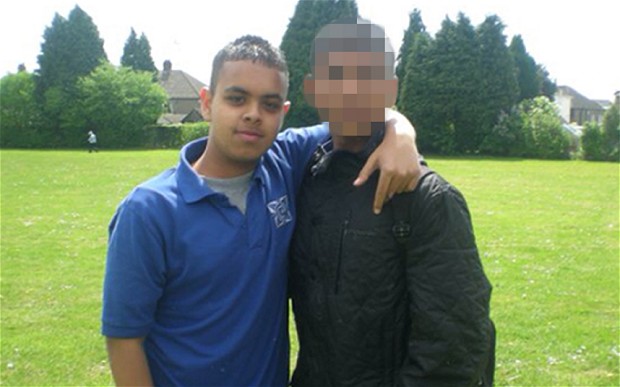 Reyaad Khan on his last day at Cantonian High School, Cardiff, in June 2010. He was assassinated by the British government in August, 2015.

The justification offered by the British government was that these two young men had been plotting terror attacks on British soil and posed an immanent threat to the lives and security of British citizens. Therefore, they had to be stopped, and the only way they could be stopped was to murder them with no due process. However, the government provided no evidence to back up the claims that they were making. Regardless of this, the mainstream press did not even question the claims that the government was making to justify its actions; did not even suggest that maybe the government should provide evidence to the public that these two were indeed plotting terror attacks on British soil and therefore killing them was necessary. When the government makes claims to justify its own abuses of power, which it then fails to support with evidence, the natural reaction of journalists should be great skepticism about what the government is saying and what its stated motives are. That’s the function of journalism in a democratic society: to hold the government to account when it has been found to have been abusing its power. As per usual, mainstream journalists got confused and believed that their function is instead to act in conjunction with the government and repeat their claims without question.

If there was indeed evidence that these two were planning terror attacks on British soil which placed the lives of British citizens in danger, then there must have been some indication as to the nature of these plots. Would they have been carried out by a delegation sent from Syria by ISIS? Would they have been carried out by the men themselves as they attempted to return home? Or would they have been carried out by people already in the UK who were communicating with these two? The first two options are inconceivable; there is no possible way a delegation sent from Syria would have been able to enter the UK and carry out a terror attack given the current hysteria over protecting our borders from potential terrorists, and there is no way that these two men, who were known to the authorities to have travelled to Syria and joined ISIS, would have been allowed to set foot back in the UK. Therefore, the only other plausible option is that the people intended to carry out the attack were already in the UK, in which case murdering Khan and Amin would not have been the only course of action available to the government; another course of action would have been to identify the UK residents intended to carry out the attack inside the UK and arrest them before they could do so. There is no indication that any arrests were made inside the UK in connection to this, which therefore throws the government’s entire story about a potential terror attack in the UK into question. Even if somehow there were some other way for these men to carry out a terror attack in the UK aside from the options I have exhausted, there is no reason why the government could not have gone into a court of law and presented the evidence before a jury, who could have then decided whether or not the two men were guilty of a crime. Is that not the way justice is supposed to work in the UK?

The truth is that the assassination of these two men was one of the most extreme examples of the government abusing its power and violating human rights in the post-9/11 era. Whatever the real motive behind the executions, one thing is certain: an extraordinary precedent has now been set, whereby it is now legitimate for the UK government to kill its own citizens with no due process of law. In a democracy, it is extremely disturbing for citizens to fear their own government because the government has the power to murder them at anytime without due process, but this is exactly the situation in the UK at the moment. This, coupled with the draconian new surveillance powers currently being pushed through Parliament and the government’s plans to scrap the Human Rights Act in the coming days, should seriously alarm anyone at all concerned about clinging onto the human rights to which we are all entitled.

I’m sure it is true that many people will find it hard to sympathise with people who have joined ISIS. But they are still human beings, and all human beings, regardless of who they are or what they may have done, have human rights. This is a fundamental truism – all human beings everywhere have human rights, not because the government grants them human rights, but because of the simple fact that they are human. Once we begin declaring some people to be undeserving of human rights, we are denying their humanity, and once we begin doing this then what separates us from the people we claim to oppose? They too are responsible for denying the humanity of other human beings. The reason why ISIS are able to behead people and slaughter children is because they no longer see them as human, just as the reason that drone pilots are able to drop bombs on villages and annihilate women and children is because they do not see the people they are bombing as human. Once we stop seeing some people as human, we are capable of doing anything and everything. That’s how atrocities happen. That’s how ‘the good guys’ become no different from ‘the bad guys’. We cannot allow that to happen. It begins fairly easily, with a couple of so-called ISIS militants being assassinated with drone strikes with very little opposition or discussion in the mainstream, but then gradually it increases and the government’s powers expand more and more until our once-democratic society is no longer recognisable to us. Love will triumph over hate, and justice will triumph over injustice, but only if we fight for it. And by ‘we’, I do not mean the artificial governments that claim to represent us. I mean we the people. That’s where real change comes from.